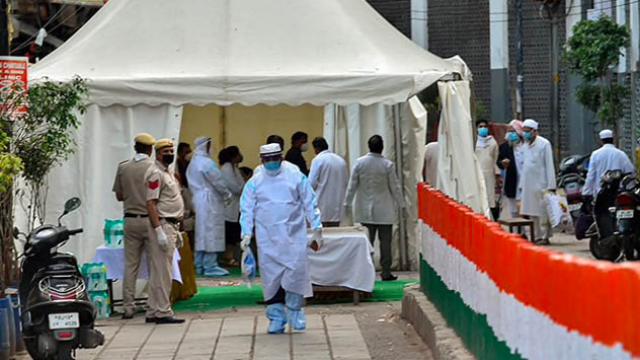 In March, 2041 foreigners arrived from 67 countries, including China, in the Markaz of Tabligi Jamaat in Nizamuddin, Delhi, which emerged as the largest corona virus hotspot in India. Indonesia, Bangladesh and Thailand have maximum number of people in this. This sensational disclosure was made in a report prepared by the Crime Branch of Delhi Police probing the case. The copy of this report is with Hindustan. Apart from this, a large number of people from 18 states of the country have reported the arrival of people connected in the tabligi Jamaat. It is also being investigated. This includes 501 of Tamil Nadu, 216 of Assam, 157 of UP, 109 of Maharashtra, 22 of Haryana, 34 of Uttarakhand, 107 of Madhya Pradesh, 86 of Bihar, 73 of West Bengal, 55 of Hyderabad, 46 of Jharkhand, 45 of Karnataka etc. Are included. Apart from this, thousands of people of Delhi-NCR used to come to Delhi every day, they too have an eye on the crime branch.

Investigation of location of foreigners on the basis of documents
Not only the capital Delhi, crime is being investigated in the case of Markaz, which is causing a great crisis in the entire country. The biggest focus of the investigation is on people from abroad. For this, the Crime Branch talked to the management and got a complete list of those who came here, out of which a complete list of people of foreign origin has been prepared at the country level. Information of these people of foreign origin is being investigated on the basis of documents shared by the agency concerned.

What are the statistics related to foreigners
It is not possible to give the data of the entire 67 countries in the Marklaj of Tabligi Jamaat located in Nizamuddin, Delhi, but in addition to the name and number of the five countries from which most people came, we also mention the number of people from all other countries. Will do in the figure. See Top-5 —

What is the police doing
The Crime Branch engaged in the investigation has shared this data with the police of almost all the states of the country. Also, information has been provided about this at the airport. On the other hand, in the areas where Makaraj of Tabligi Jamaat is in the country, these foreigners are being searched by raiding. Those who are getting any of this have been sent to the Quarantine Center and Corona for examination if they have symptoms.

What could be the action
It is getting information about these foreigners that most of them came on tourist visas, so how they got involved in religious program is a big question. In this way, their visa can also be canceled. Actually according to the rule for which you get a visa, you travel to a country only for that.

The program was three days
A major religious addition (Jalsa) of the South-Indian states was organized in Markaj on 15,16 and 17 March. In addition to the South Indian states, there were about 20 other North Indian states and people from abroad. During this period, the corona virus infection spread through some outsiders, which gradually took a formidable form.

What to say about the special commissioner
Special Commissioner of Crime Branch Praveer Ranjan said that in the investigation of the case, Special Commissioner Praveer Ranjan, who heads the Crime Branch, says that we are currently engaged in the investigation of most people who came to Markaj. So that their corona can be checked and infection can be prevented by sending them to Quarantine Center.