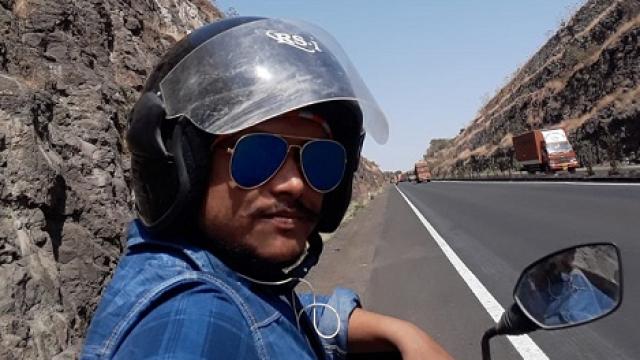 Due to fear of Corona, an engineer working in a private company in Maharashtra reached his home in Sonebhadra, UP from Scooty. It took him three days to come to Sonbhadra from Maharashtra. In three days, he traveled about 1710 km. Petrol cost of two and a half thousand rupees was spent in deciding this journey.
Atinder Tripathi, a resident of Chapil village of Ramgarh in Sonbhadra district of UP, said that he is working as an engineer in a private company in Palghar, Maharashtra. He told that in view of the increasing infection of the corona virus and the increasing dangers while traveling in the trains and buses, he decided to go to his house from Scooty itself. On March 20, at half past one, she took a scooty and left Palghar in Maharashtra. On that day, he traveled about 160 kilometers and reached Nashik. After stopping at Nashik at night, he left for the next morning at 5:30 in the morning. After traveling about 600 kilometers, he reached Bhopal at nine o’clock. That day he stayed in Bhopal only at night.

After this, he left from Bhopal at 9 am on 22 March. From there, he traveled about 400 km via Vidisha, Lalitpur, Jhansi and reached Orai Jalaun at nine o’clock at night. After leaving Orai at night, he left Orai at six in the morning of 23 March. After traveling from Orai to Fatehpur, Allahabad, Gopiganj to Mirzapur, on the same day, at around 5 in the evening, he reached his home in Chapail village of Ramgarh in Sonbhadra, about 550 km. Atindra said that he traveled about 1710 km from Maharashtra to his home in Sonbhadra. During this, he filled up petrol worth about two and a half thousand rupees in his scooty. After coming home, with the help of family members, she also got her examined in a nearby hospital. Atindra says that he is completely healthy, he has no problem of any kind.