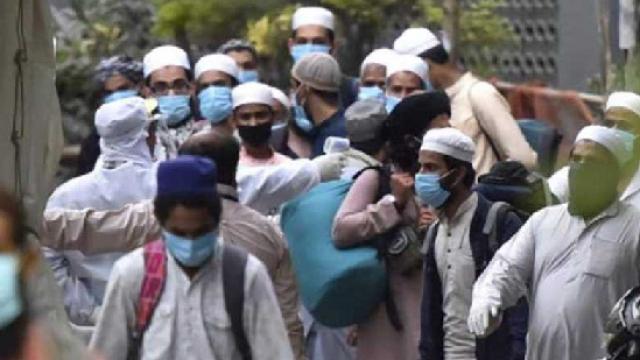 Many people involved in the Tablighi Jamaat religious program in Nizamuddin Markaz, Delhi, have been stirring around since the confirmation of dangerous corona virus infection. It is believed that more than 2000 people joined the Tabligi Jamaat, which were not only from different states of the country, but also from Pakistan, Bangladesh and abroad. The police had to make a lot of efforts to evacuate people from Markaj and 2,361 people were evacuated after about 36 hours of operation. After the case of Markaz on Tuesday, there was an increase in the number of patients in the country. However, Delhi Deputy Chief Minister Manish Sisodia said that Markaz of Tabligi-e-Jamaat in Nizamuddin (West) was completely evacuated and out of 2,361 people who were evacuated from Markaz, 617 were hospitalized and the rest were quarantined. is. So far, the number of corona virus positive people has risen to 93 from those who were removed from Nizamuddin Markaz.

Actually, it is also important for you to know about the people involved in the program of Tabligi Jamaat so that you do not get in touch with them because according to the statistics so far, it is a big case of corona virus cases in the country. Can increase. Six people of Telangana who came in this market have also died. Let me tell you that more than two thousand people attended Tablig-e-Jamaat’s Ijtime (gathering in a special place for religious purposes) between 1 to 15 March in Nizamuddin West area of ​​South Delhi. These included people from Pakistan, Indonesia, Sri Lanka, Afghanistan, Malaysia, Saudi Arabia, England and China and Malaysia. So let us know in which states the people came in the market of Tabligi Jamaat and their number.

157 people were involved from UP
There were 157 people from Uttar Pradesh who joined the Tabligi Jamaat in Nizamuddin, Delhi, out of which 95 percent have been identified. The administration has now quarantined them.

9 people came from Punjab
According to information received from officials from Punjab, the Punjab government has identified nine people who attended this meeting. All of them are in Delhi. Participants from Punjab included four from Ludhiana, two from Sangrur and one each from Barnala, Gurdaspur and Pathankot.

Two people from Puducherry infected with Corona virus
Two residents of Puducherry, who joined the area in Delhi’s Tabligi Jamaat, were found infected with the corona virus on Wednesday. Director of the Department of Family and Welfare Mohan Kumar said that these two people who returned from Delhi were admitted in the government hospital here. The source said that both are residents of the nearby Ariyankuppam village here.

26 people from Uttarakhand joined the Tabligi Jamaat in Nizamuddin, Delhi. The official confirmation from the government has involved 26 people in this religious event. According to sources, the maximum number of people are from Haridwar district. Apart from this, Uttarkashi and Dehradun and the rest are from other districts.

People in Markaj increased the number of cases in Andhra
In Andhra Pradesh, 43 new cases of corona virus have been reported since Tuesday night, taking the total number of cases in the state to 87. It is believed that most of these cases are related to a program of tabligi Jamaat. In West Godavari district, 13 cases of infection with this virus have been reported while 15 cases have also been reported in Kadapa district. However, it is not yet clear how many people from Andhra had visited Markaj.

17 people from Himachal were involved
Himachal Pradesh Chief Minister Jairam Thakur has said that 17 people from the state had joined the Tablighi Jamaat congregation in Nizamuddin area of ​​Delhi and are under 14 days of surveillance in Delhi. He said that as of now he has no symptoms of Kovid-19.
Send feedback
History
Saved

Corona Virus: How dangerous is ‘irresponsible’ behavior in this round?